Twenty-four European countries participating in the COST Action FACESMAP (FP1201) have completed a two stage expert assessment of the significance of change during three decades (1985-2015). The first stage assessment was carried out as part of a country report assignment, where the involved country experts where asked to specifically assess new forest ownership trends in their country on a 0 - 3 scale (0 = not relevant, 3 = highly important). The predefined drivers were the same and when reported relevant, countries were asked to add case examples. The results of this first stage assessment were summarized and presented at a workshop were indicators for a proper measurement of the trends and their assessment were discussed.

Based on the collected answers we developed a cross-country comparative assessment of the existing trends of forest ownership change in a European perspective, after which we asked country experts to revisit their assessment (stage two). When trying to base the comparative assessment on solely existing quantitative data, we realized that it would not be possible to achieve a complete picture since many figures are not available for all countries and the data sources are often incompatible. Therefore we had to rely on additional expert judgements. The expert opinions furthermore allowed to go beyond the mere figures to include an assessment of the significance of this trend within the very country situation. Thus, the given significance levels (0-3) assess the specific trends of change in each country when compared to other countries, not compared to other developments in the same country. The resulting maps should give a comparative picture for each trend in a European perspective, they are not to be directly compared with each other.

The restitution of forests in CEE-ESEE countries had very diverse goals and was implemented quite differently (example: no restitution of forest land in Poland). It is still ongoing in many countries of this region. Until now it caused profound changes in forest ownership structures in most countries of this part of Europe (share of private forest owners raised in many countries from zero to more the 40 or 50% such as in Lithuania or Romania). Privatization of state forests has also taken place in other European countries, but not for high percentages (Norway, Sweden, UK). 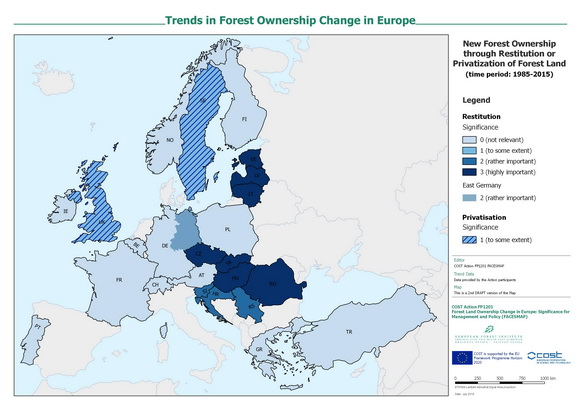 The mobility of forest land on the markets differs greatly across countries. Besides a lively market in some ESEE countries after restitution, some Western European countries (e.g. UK) have higher turnover than others. Sometimes, the buyers are foreign investors (e.g., in EE countries such as Estonia) or investment funds (e.g. in Finland, Romania, Latvia). In some other countries, such as Sweden, Germany and Poland it is more characteristic that existing owners or their heirs buy in order to enlarge their properties. 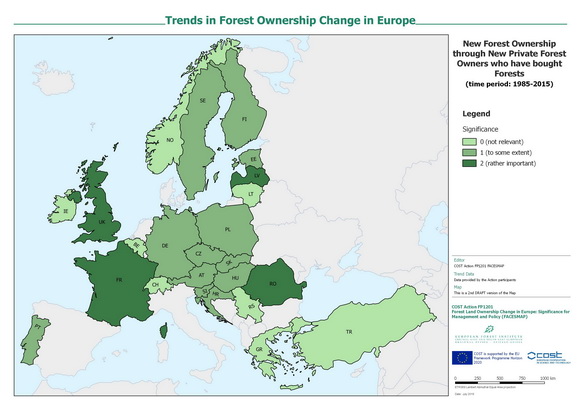 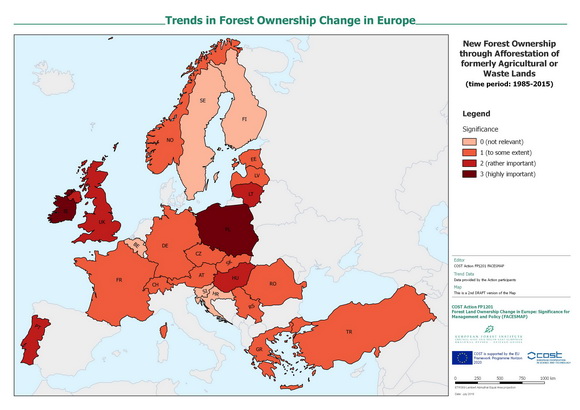 We aimed here to picture the trend to urban or non-traditional/non-farm forest owners, with often different or new goals and motivations for their forests, for instance, non-economic goals, or total abandonment of forest management. This trend is often coined “urbanisation”. Indicators identified behind these changes include less farming, ageing population, depopulation of rural areas, as well as new objectives and goals for forest management when, for instance, the forest is not seen as an income source any more. It is mostly relevant in western European countries.

All in all, we see the same trends of urbanisation ongoing across all of Europe, however, to different extent and in different phases. In Sweden, for instance, it is reported that much of this development has already taken place before the recent 30 years (the time period our survey refers to) while in ESEE countries this is rather ongoing as most of the restituted land owners are non-traditional by definition as they did not own any forest land during the socialist period. 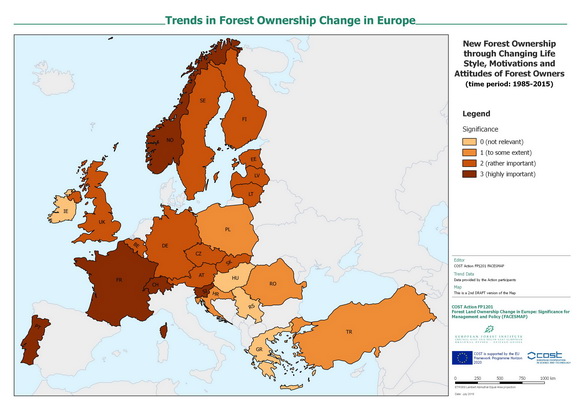